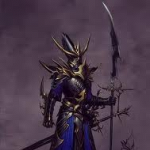 Hello, Im Master Shadow Warrior and I hail from the mytical island continent of Australia. I have had a deep intrest in Elder scrolls history since I came out of that dark tunnel out of the imperial prison and saw the landscape that was Cyrodill. Having been a fan of the game Oblivion I went out and found the game Morrowind, then went on to get Daggerfall. When Skyrim came out I immediately bought it and sank a good few hundred hours into it. But this made me wonder about the lore and history of these places so I found the Elder Lore podcast on ITunes (seriously I would reccomend this for people wanting to learn about the history of all of Nirn) And this left me deeply enriched enough to go on to create my own fantasy world. Months passed and I joined the 40k wiki and got involded with a few things their untill I stumbled on this wiki, and so here I am now.

Since the second demise of the Barachis project, nowadays, I mostly just lurk in the shadows, finishing off unfinished work on other wikis. Though, every once in a while I will make an edit, leave a comment, or just send messages to others. There is the secret project that i'm also adding a little to....

Ri'Shieth- My first article, It is about a Khajiit living in a few years before the events of TESO wandering around Tamriel to find Adventure. (Incomplete)

Do'Vas- Another Khajiit, part of the Ri'Shieth story in which he is the one that adopts Ri'Shieth at an early age and teachs him the age of two handed sword fighting. (Up to date)

Ervyna- A female Dunmer whom would eventually become a wise woman that falls to the lure of dark magic.(In progress)

Lost Shelter- The first place Natalia finds on Atmora; it is a old Atmoran fishing village preserved in the ice only mystirously thored out just before Natalia arrives. (Incomplete)

South Hope- The site of the legendary Battle of South Hope, now a major city in the kingdom (Incomplete)

The New Kingdom of Atmora- A working progress, its basically about people from all over Tamriel wanting an end to the bloodshed and flee to Atmora to make a new kingdom for themselves. (Incomplete)

Duessha- The Dalmer homeland, a harsh place filled with desert and badlands (Up to date)

Valmer-(working with Pikapi on this one) The ancestors of all Elven race's currently living on Barachis. (Incomplete)

Oegnithrn- Me and EdwardChap are making this one. (Nearly There!!!)

VaughanTES- The only person still active on this site when I arrived (that I saw) And has helped me ever since. Dispite having experience from the 40K fanon I am still new to wiki's and Vaughan help me learn how to use and eventually master editing and creating pages

Supahbadmarine- A friend and Admin back over at the 40K fanon, he has offered crucial advice and has always helped me.

Retrieved from "https://tesfanon.fandom.com/wiki/User:Master_Shadow_Warrior?oldid=30505"
Community content is available under CC-BY-SA unless otherwise noted.